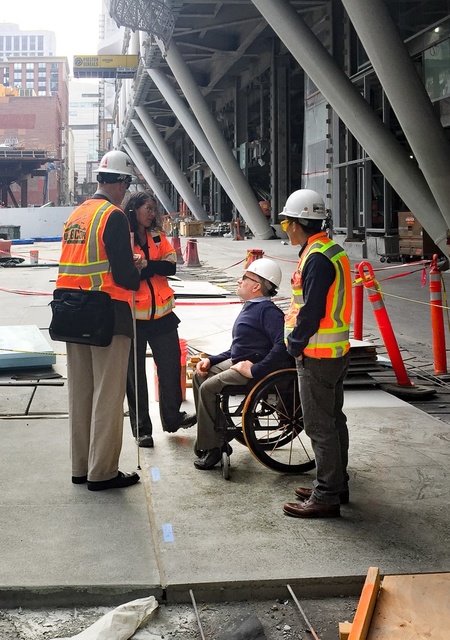 The purpose of the Pacific ADA Center is to build a partnership between the disability and business communities and to promote full and unrestricted participation in society for persons with disabilities through education and technical assistance.

The Los Angeles U.S. Attorney’s Office announced that it has signed agreements with 27 hotels across Southern California to resolve investigations pursuant to the Americans with Disabilities Act (ADA).

The agreements were finalized after federal investigations into the hotels revealed non-compliance with various provisions of the ADA pertaining to public accommodations. The hotels agreed to remedy the violations, with some agreeing to stop the illegal practice of charging more for accessible rooms – a “disability tax” of up to $25 when compared to similar non-accessible rooms.

The hotels that have entered into settlement agreements or letters of resolution with the U.S. Attorney’s Office are:

There are no upcoming events scheduled.

@adapacific - Apr 16
Are you looking to learn more about the #ADA? Do you want to brush up on your basics? The Pacific ADA Center hosts a resource page linking to several web courses that can help you. Click the following link to learn more: https://t.co/kqzj5G3RnI https://t.co/oHVVq3ARZK
@adapacific - Apr 15
ADA Basic Building Blocks This introductory web course explores the legal requirements and the spirit of the #ADA. The course content is self-paced and organized into twelve topics that have been designed to be studied in order. Find the course here: https://t.co/4OyXh2fCqT https://t.co/n75IDqWPwf
@adapacific - Apr 15
Frequently Asked Questions about Service Animals and the #ADA This fact sheet by @TheJusticeDept and provided by the Pacific ADA Center addresses several common questions about service animals and the ADA. https://t.co/BJLzGiHi8b #FAQ #ServiceAnimals
@adapacific - Apr 14
Health Care and the #ADA This factsheet provides a broad overview of the ADA for Health Care Providers. The ADA requires that health care entities provide full and equal access for people with disabilities. Find the factsheet here: https://t.co/XbPY5KySsS #Factsheet #Access https://t.co/7VjbanYllN
@adapacific - Apr 14
RT @NARICenEspanol: A medida que se acercan las nuevas fechas de elegibilidad para las vacunas #COVID19, garantizar que los lugares de vacu